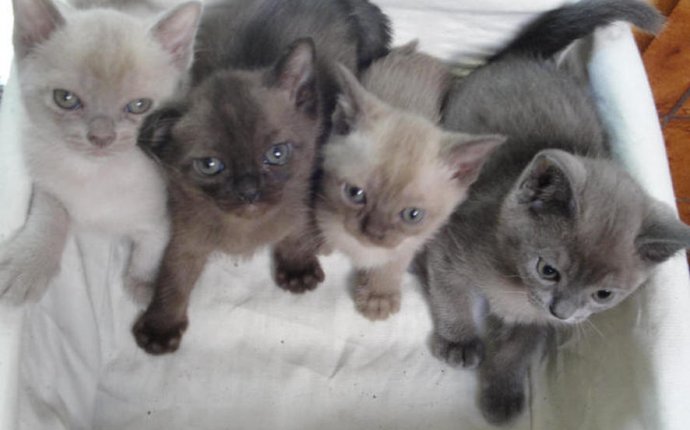 Breeders and fanciers report that Burmese are amusing, playful, and super-smart, the perfect interactive cats for home, office, shop, any place where people are in need of love and entertainment. They are as active as the Siamese and love to play. Devoted cats, Burmese are loyal and people-oriented.

Breeders report temperament differences between males and females. The females are highly curious, active, and very emotionally involved with their family. The altered males love their humans too, but are more placid. They like to lounge about, usually on top of whatever you're doing. They take life as it comes. The only issue about which they are passionately concerned is the selected cuisine and when it will be served.

Burmese have a unique rasp to their voices and sound a bit like cats going hoarse from too much talking. Burmese are not as talkative as their Siamese neighbors. When they have something to say, however, they'll reiterate the message until you get out your universal feline/human translator and take care of whatever it is troubling them.

The Burmese's body style has changed over the years. The 1953 standard described the Burmese as medium, dainty, and long. By 1957 the standard was changed to midway between Domestic Shorthair and Siamese. The words 'somewhat compact' were added to the standard in 1959; the word somewhat was dropped from the standard somewhat later. Since then, the standard has remained virtually un-changed.

Over the last 20 years or so a difference of opinion has developed among breeders as to the favored conformation of the breed. One group favors the European Burmese, longer, narrower muzzles with a less pronounced nose break and a slightly narrower head. The other favors the contemporary Burmese, shorter, broader muzzle, pronounced nose break, and broader, rounder head shapes. Because of this, two conformation types exist today. In the CFA, the European Burmese has just been accepted as a breed in his own right in the miscellaneous class. (In International Division shows they are eligible for championship.) In CFF, CCA, and UFO, the breed is recognized under the name 'Foreign Burmese'. TCA recognizes the classic and traditional Burmese.

One of the main differences between the two breeds, besides the head and body type, is that the European Burmese comes in additional colors. Because the Burmese was crossbred with European Siamese lines that possessed the red gene, the colors red and cream were introduced, producing six additional colors.

Interested in the history of the Burmese cat breed?

The modern Burmese saga began in 1930 with a female cat named Wong Mau. This brown feline was brought to the United States from Yangon, Myanmar (the former Rangoon, Burma). Some sources say Wong Mau was brought to the United States by a sailor and was given to a U.S. Navy doctor named Dr. Joseph Thompson. Other sources say that Dr. Thompson himself brought Wong Mau back from Myanmar. The latter is likely true, given Dr. Thompson's interest in the Far East and its cats.

Thompson spent time as a Buddhist monk in Tibet and became fascinated with the shorthaired, brown cats that abounded in the area. These felines, called copper cats in their native region, have been around Southeast Asia for centuries. They were described and illustrated in the Thai book the Cat-Book Poems that dates between 1350 and 1767. As the legend goes, the Burmese is a descendant of a breed once worshiped in Burmese temples as embodiments of gods. The Cat-Book Poems also shows pictures of the Siamese and Korat cats, indicating that these cats existed as separate, definable breeds centuries ago.

Thompson was so taken with the unique brown coat of Wong Mau and her charming personality that he set out to determine her genetic makeup and establish a scientific breeding program so he could create more just like her. Since no male counterpart made the journey, and since Dr. Thompson also bred Siamese cats, Wong Mau was bred with a seal point Siamese named Tai Mau. The resulting kittens came in three color variations: beige, brown, and pointed.

During his investigation, Thompson discovered that Wong Mau herself was a Siamese hybrid - half Siamese and half Burmese. The sable (brown) kittens were crossed with each other or back to Wong Mau. It was discovered that the Burmese gene responsible for the sable color is a member of the albino series of gene. The Burmese gene causes solid black to appear dark sable brown by reducing the amount of pigment in the hair. Today, the point-restricted color is not noticeable in adults, but it is notable in Burmese kittens to a certain extent.

The CFA accepted the Burmese in 1936. Other breeders imported a few more cats from Burma to increase the gene pool, but outcrossing to Siamese continued in the 1930s and 1940s. Siamese breeders, however, were less than thrilled with the doctor's discovery; rather than considering Wong Mau an exciting new breed, they thought she was just a poorly colored Siamese and believed that if she were allowed in the cat fancy she would spawn many more poorly colored hybrid kittens.

Despite the setback, Burmese breeders continued to work with and develop the breed. After much effort by breeders and fanciers, the CFA reinstated the Burmese for recognition in 1953, and for Championship in 1957. The renewed acceptance was based on a new standard that permitted only solid coat colors without markings.