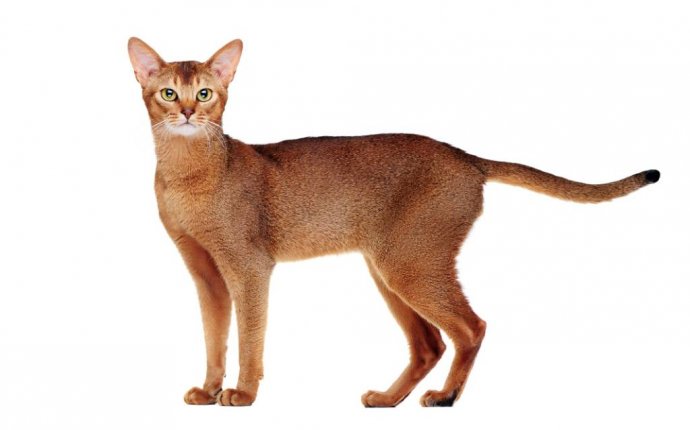 Abyssinians aren't for those who want decorative cats to match the rust-colored carpet, or for those who want cats that enjoy being picked up and cuddled. Courageous, curious, and high-spirited, when restrained Abys tend to become struggling bundles of fur with more than the usual number of elbows; however, that's not to say that Abyssinians are aloof or standoffish. While Abyssinians will cheerfully entertain themselves, they are most happy when involved in every aspect of your life. They are particularly involved at dinnertime. In fact, you'll know it's dinnertime when small, furry, food-seeking missiles attach themselves to your legs!

Abyssinians regularly perform antics for your amusement, earning them the reputation of being the clowns of the cat kingdom. They will often perch on shoulders, crawl under covers, and sit on laps purring madly before racing off to bat imaginary butterflies and make flying leaps at the tallest bookcases. Natural athletes, no closed room or cupboard is safe from their agile paws and inquiring minds.

The Abyssinian is a ticked or agouti breed. The distinctive coat appearance comes from the combination of colors on each hair shaft. The lighter or ground color lies closest to the skin and each hair shaft has dark-colored bands that are contrasted with lighter-colored bands. The hair shaft ends with a dark tip.

Abyssinians have few genetic defects but, like their long haired counterpart the Somali, are prone to gingivitis and tooth decay. If the Abyssinian can be trained to cooperate with regular tooth- brushing and applications of fluoride, and if periodic professional teeth cleaning and checkups are provided, the problem can be minimized. Abyssinians and Somalis are also susceptible to amyloidosis, a renal disease thought to be hereditary.

Interested in the history of the Abyssinian cat breed?

Although no one knows positively when or where the Abyssinian first appeared, the best known tale is that today's breed is a direct descendant of the sacred cats worshiped as the physical manifestations of the gods in the temples and palaces of the ancient Egyptians some 4, 000 years ago. Abyssinians do look remarkably like the cats depicted in Egyptian murals and sculptures.

An Abyssinian named Zula was transported from Abyssinia (now Ethiopia) to England at the end of the Abyssinian War in 1868, according to Dr. Staples in his 1874 book, Cats, Their Points, Etc., but whether the cat was native to that area is subject to speculation. Recent genetic studies indicate that today's Abyssinian may have descended from a breed found in Southeast Asia and the coast of the Indian Ocean. Abyssinians do resemble the African wildcat (Felis silvestris lybica), the progenitor of all domestic cats.

Since there's no written evidence linking Zula with today's breed, some breeders maintain that the original lines died out and the Abyssinian was recreated by British breeders. Undeniably, the breed was established and refined by early British fanciers until World War II decimated the breed, forcing British breeders to start over from scratch.

Two Abyssinians arrived in America in the early 1900s and were first exhibited in 1909. Active breeding of Abyssinians didn't begin until the 1930s, but then breeders made up for lost time. Today, the Abyssinian is second only to the Siamese in popularity among the shorthaired breeds, according to the CFA's registration totals.