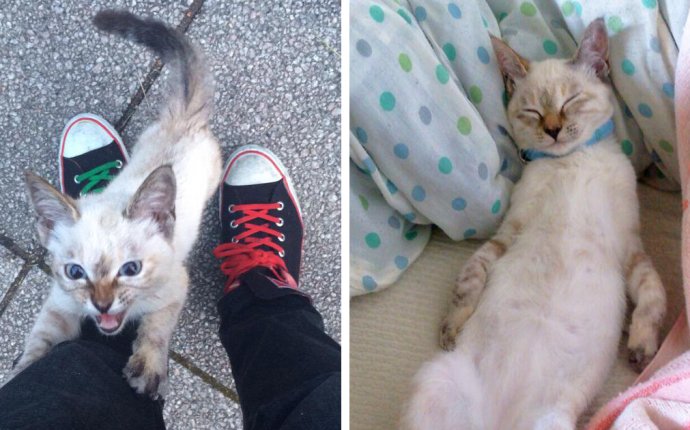 I’ve always been a cat person. My boyfriend, on the other hand, was on the fence before we adopted two cats from the street. Maybe it comes down to our upbringing. I loved my parents' cat to death even though it had a serious attitude problem; my boyfriend’s childhood cat peed on his dad’s face and got itself kicked out.

We had moved into a flat where it was just the two of us for the first time. It was small, with two bedrooms and a little garden on a tree-lined road in London. Living in London means that even if your job is a nine-to-five snoozefest that lets you leave on the dot every day, you’re still not going to spend much time in the house. There’s drinks to be had, the latest Korean Fried Chicken shop to try out and, more often than not, a minimum one-hour commute back home.

Because of this, a dog was out of the question, so my boyfriend was slowly coming around to the idea of a cat companion. But there was still some more persuading to do.

That’s when I met her; a little black cat padded up to me when I was walking home. Usually, the cats on our street run away or hiss when you try to touch them. This one wouldn’t leave me alone until I petted her.

I thought it would be amusing to show up at my front door with a stray cat (right?). I made those stupid kissy noises people make at cats to encourage her to follow me. I swear I didn’t pick her up at any point. I’m no cat thief.

My boyfriend opened the door, and before I got to yell "Surprise!" the cat was in our flat like a shot. We took a closer look and saw her collar was all stretched out of shape and her shoulder blades were sticking way out. She was a cuddly toy without the stuffing, and it was obvious she didn’t have a family. At least not anymore.

She slept at the foot of our bed that night and woke us up at an ungodly hour, meowing and rubbing her head on our faces. I was falling. We gave her a cuddle, got ready for work and then let her out with us.

My boyfriend was convinced, too, and when we got home that night, she was waiting for us. We knocked on our neighbours' doors, but no one knew who she belonged to. One said it had stayed with her a few weeks ago, so she must have been on the street for a while.

It was meant to be, and we decided to give her a better life. We named her Franz, and that was that.

Or so I thought. A few weeks after we adopted her, she went from being a calm soul to visibly agitated. Constantly meowing, rolling around on the floor, and getting into a state if she couldn’t get out of the house. We were concerned and tried to keep her inside until we could get her to the vet. But she was too determined.

For two days, we didn’t see her. One the third night, I woke up to noises noises coming from our living room. At first I figured it was the neighbours. But when it didn’t stop, I woke my boyfriend up and asked him to come check with me. He grabbed the broom and we walked down the hall. The noises were getting louder, the crashing and banging becoming more intense as we got closer. We opened the door, expecting the worse.

And there was our little princess with some street stud she had picked up.

Two thoughts came to mind: One, a burglar would have been better than this, two, I now know how my mother felt when I brought my first boyfriend home.

Franz’s tastes weren’t unlike mine as a teenager. This dude was smelly, long-haired and a clear commitment-phobe. Desperate to get out of our house, he flung himself at the windows, climbed the walls (god knows how) and pissed on everything including our brand new sofa cushions. We tried to shoo him away with the broom, and Franz scampered to safety.

That’s how we went from one cat to expecting up to seven more.

Franz blossomed with pregnancy; her coat was glossy and her shape voluptuous. She made me want to start taking prenatal vitamins. I researched what the delivery would be like and made her a birthing box. I daydreamed about rolling around with kittens — work was slow — and provided daily pregnancy updates to my colleagues. I booked a week off work and told my boss to be prepared that if the big day came early, they’d have to do without me. He has two children, so he got it.

When cats are ready to give birth, they spot blood like humans do. When it starts, you can expect kittens the same day. But when Franz started bleeding, she didn’t stop. After two days, we called the vet, who told us something was seriously wrong and to bring her in right away. The kittens hadn’t survived the pregnancy, and Franz needed an emergency hysterectomy.

I was disturbed and upset. I felt stupid for getting so excited, and felt bad that the cat was going through something so horrible. I emailed one of my colleagues asking her to tell people what had happened so that I wouldn’t have to talk about it on Monday. At all.

I told the people who wanted to adopt kittens what had happened. A friend who always told me he laughs during funerals sent me a series of supportive text messages. We had all lost perspective. The worst bit was when the vet told us she had probably eaten the fetuses at some point, because he could only find rotten placenta inside of her.

I thought taking in this cat would be stress-free, but here I was crying at home and £600 (more than $900) out of pocket because we didn’t have pet insurance.

Eventually, Franz recovered from the operation, and I felt better, too, despite really wanting to have had that litter of kittens.

Well, next thing you know, I’m coming home from an evening of drinks, and a tiny little kitten is out in the freezing cold on our street. Old habits die hard, so naturally I scooped her up and took her home. There was no way this tiny little thing could look after itself.

We introduced her to Franz, and after a few tense staring matches, they got on like a house on fire. It was like the child she never had.

We called her Fritz.

A girl I worked with at the time told me, “I always wanted a cat to follow me home. It’s not fair that you got two.”

In one way, she was right — it was a dream come true. But thinking about what we had been through with Franz, and seeing how tiny Fritz was when we found her, also left me feeling annoyed that their owners hadn’t been more responsible. We had put up posters hoping to find her owners, because what could be more devastating than losing a tiny kitten?

A local gossip was the only person that got in touch. It turns out one of the families on the street was letting their cat get pregnant over and over again, and putting the kittens on the street when they became a nuisance, which really sucks.

Our time with the cats has been a rollercoaster. It’s been fun, it’s been sad, and it’s been gross. I learned about life, loss and love, which sounds way more romantic than it is.

I also learned that cats sure as hell aren’t the responsibility-free dream pet I thought they were. We learned that the hard way, and I can safely say that having your own cat spayed or neutered is essential, both for his or her health, and to keep more cats from being homeless.