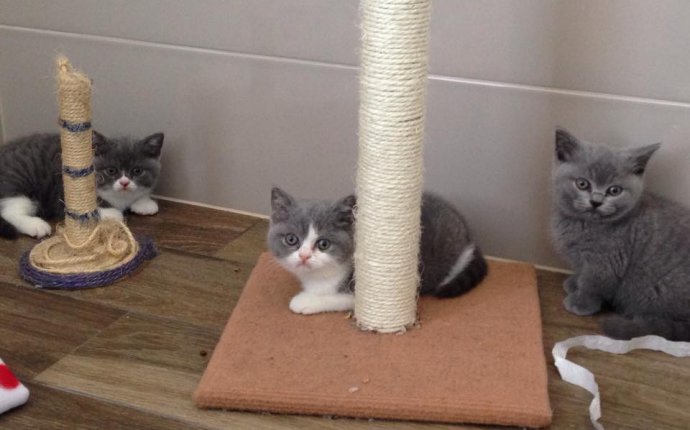 If you're looking for a cat that will loot your refrigerator and swing dizzily from your chandeliers, then the British Shorthair is not for you. Brits are quiet, even-tempered, undemanding cats with a bit of typical British reserve, particularly when they're first introduced. When they get over their initial shyness, however, they become extremely faithful companions. British Shorthairs tend to show their loyalty to the entire family rather than select one person with whom to bond. British Shorthair breeders describe Brits as cats that like to keep a low profile, sweet and affectionate but not clingy 'in-your-face' type cats. They tend to be independent and if left on their own can usually adapt quite well.

Like the American Shorthair, the British Shorthair is known for its health and vigor. The breed is cobby in design, compact and powerful with a round, massive face and head. This head design sets the breed apart from other breeds developed from domestic shorthairs. A very dense, short, resilient coat is important in the show British Shorthair. The fur feels solid to the touch, like sinking your fingers into firm, warm velvet. The coat is not double-coated or woolly, which makes up-keep easier; however, regular grooming is important. Although blue is the most common, the British Shorthair comes in a variety of colors and patterns.

Interested in the history of the British Shorthair cat breed?

The Brit's progenitor was a common street cat once called the European Shorthair. This breed (whose conformation is much different from the Brits you'll see in show halls today) came to Great Britain some 2, 000 years ago, courtesy of the Roman Empire. The Romans, who kept cats as pets and for rodent control, transported this shorthaired breed to northern Europe and eventually to their outlying provinces in the British Isles.

For centuries, this rugged cat hung out in Great Britain's alleys and barns. In the late 1800s cat fancier Harrison Weir, well known for his contributions to the emerging cat fancy, was instrumental in establishing the British Shorthair as an officially recognized breed. Through his efforts, British Shorthairs were featured in England's first cat show at the Crystal Palace of London, and quickly became popular with the British cat fancy.

Just before the turn of the century, longhaired exotics caught the cat fancy's eye and British Shorthairs declined in popularity. Nevertheless, Brits held their own until the chaos of World War II decimated the breed (along with many other European breeds as well).

After the war, breeders dedicated to preserving the British Shorthair gained permission from the British Governing Council of the Cat Fancy to interbreed their Brits with other cat breeds to rebuild the gene pool. Persians were bred into the existing bloodlines, and shorthaired breeds such as the Chartreux were also added. These efforts transformed the Brit into its current form: a large, powerful mini-teddy bear with a full, round face and a placid disposition.

American cat fanciers took little notice of the British Shorthair until the 1960s, and it wasn't until 1970 that ACFA recognized the blue British Shorthair under the now obsolete moniker 'British Blue'. (Blue was, and still is, the most common color both here and in Great Britain, due to the large number of Chartreuxes and blue Persians bred into the bloodlines after the war.)

The breed slowly earned supporters in the United States, and between 1970 and 1980 the remaining associations accepted the Brit into the North American cat fancy.