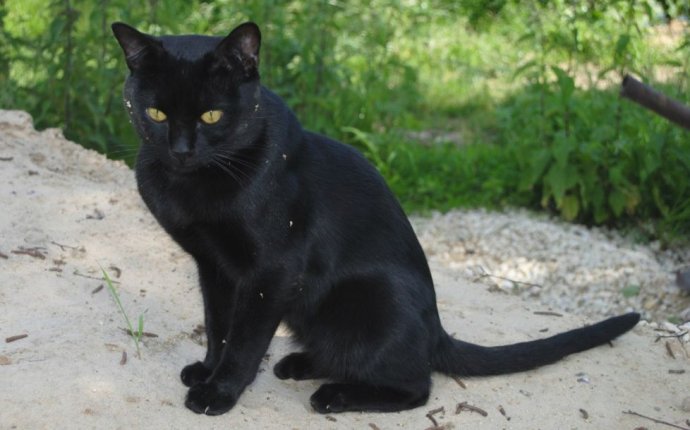 If an aloof, independent cat is what you're craving, this breed isn't for you. Bombays are attached to their family, and tend to love the entire family rather than bond with only one person. Fanciers say they are particularly good with children.

They want constant attention, although they are gentle and polite in their attempts to gain your notice. When you sit down, don't be surprised to find your Bombay sitting beside you moments later. Curious and intelligent, Bombays love to play, but are not as rambunctious as some breeds. Generally, they are not as vocal as the Oriental breeds.

Black to the roots, the Bombay's coat invites caressing with its fine, satinlike texture and shimmering 'patent leather' sheen. Bombays develop slowly, gaining their eye color and gleaming coat well after they are four months old. Some prospective buyers tend to think the kittens look rather ordinary. Bombays, like fine wine, seem to improve with age.

Interested in the history of the Bombay cat breed?

The Bombay was created in the 1950s by the late Nikki Horner, an American breeder who wanted to develop a cat that possessed the conformation of the Burmese but with a sleek black coat and copper eyes instead of brown fur and yellow eyes, sort of a pint-sized panther. She named the breed after Bombay, India, land of the black leopard. She first attempted to breed a female Burmese to a black American Shorthair. The results were disappointing; they looked more like poor American Shorthairs than anything else.

For her second try Horner chose her breeders and cats more carefully. She shopped around until she found a black American Shorthair male that had the rich eye color she wanted and bred him to one of her best Champion Burmese. After much trial and error, Horner finally produced the results she was looking for: a cat with the conformation and short polished coat of the Burmese, and the American Shorthair's copper-colored eyes and black color.

Creating a breed, even one as striking as the Bombay, doesn't mean cat fancy acceptance, however. Horner found that the Burmese breeders and the cat associations weren't overly willing to accept her new kid on the block. Since the breed had not been accepted for Championship, Horner had no Champion cats with which to catch the attention of the cat-acquiring public.

It wasn't until 1970 that the breed was accepted for registration by the CFA. Advancing from registration to provisional status meant Horner had to form at least one breed club and register 100 examples of the breed. Eighteen years after Horner began her efforts, the breed gained eligibility to compete in the Championship classes on May 1, 1976. While still currently rare (in 1996, the CFA registered only 91), the breed has a dedicated following.